As we grow up, we cut wings of our imagination and form rigid opinions that in turn becomes dogma of your life. Here’s an inspirational story by Manas Madrecha that hopes to rekindle your belief and make you acquaint with the fact that nothing that stifles your beliefs is incontrovertibly true, because Truth is collateral to perceptions. After all, a person may be just another individual to you; but for that person, you may be the whole world. 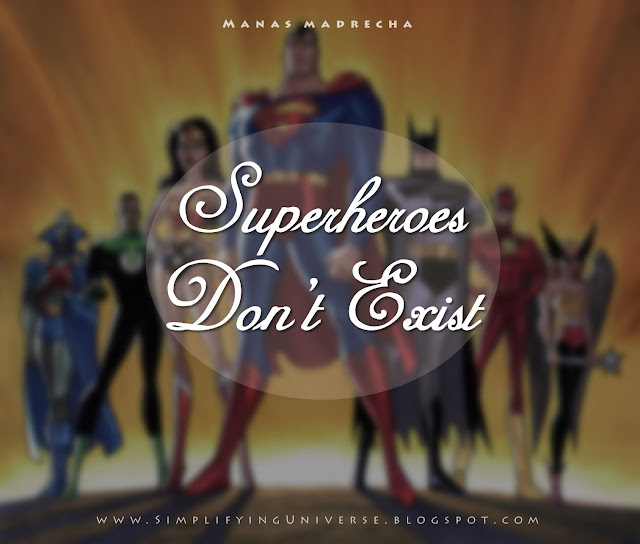 The ambience was replete with rosy splendor of nostalgia. Handsome men in their shiny blazers and beautiful women clad in elegant sarees, were recollecting their old memories with each other. The fervor was at the hilt in the alumni party of their old school in Mumbai.

“Do you remember how Saurabh used to bring those Marvel comics, and we used to fight over who was the best superhero?” asked Priyanka, the renowned lawyer of Delhi.

“But of course, that’s Iron man!” Mohit, the CEO of eCommerce ShopNow, contended.

“Oh please, how can you forget the mighty Hulk?”

“Hey guys,” intervened Saurabh, the successful surgeon and the merry andrew of their three’s group, “if you are talking about superheroes, how can you forgot our Shaktiman!” All of them guffawed at his jape.

“But, those are mere childish things, aren’t they?” Rajesh, an old nosy classmate poked in their three’s group. “I mean, they are fiction! Superheroes don’t exist in real world.”

Priyanka, Mohit and Saurabh – the three of them – looked at each other ponderously, grinned for a split second and whopped, “We don’t think so!” The baffled Rajesh stared at the three weirdos and walked away yattering to himself, unaware of the three’s story of life.

It was late midnight, and being a solitary pedestrian in this new city, my heart was thumping hard inside my chest. I was returning from my boss’ office after researching for some case law as a paralegal. All of a sudden, my feet came to a halt. Four despicable ruffians were standing in the middle of the road as if waiting for someone, or worse, most likely me. What chance did one girl have against four hooligans!

“Hey, sweetheart,” one of them bellowed sleazily, “why don’t you come here?”

I ignored the squalid hoot, but the fear that I felt was ineffable, when they started walking towards me slowly. But never before did I sigh a more assuasive relief, when I heard the blaring siren of a police car.

All four of them took to their heels, as a well-built officer climbed down. “Is everything okay, madam…?”

“It’s Priyanka. Yes, it is now.” A superhero in police’s disguise had come to my rescue.

I had completed my engineering a year ago, but even after being a brilliant student, the dubiousness of getting job offers had paved the way for frustration to creep in. Since three weeks I was going from door to door in search of mentors to invest in my start-up, but to no avail.

My bedroom door clicked open and my elder brother walked in. “You want your start-up to flourish by brooding, Mohit?â€�

“Oh, then take rest,” he said puckishly, “I thought you’ll jump on your feet now that you’ve got your funding.”

“What are you talking about?”

“Your brother has broken his fixed deposit for your funding,” my brother’s wife smiled as she entered the room.

“Get up, Mohit” he urged me up, “I want to see your name in Time magazine.”

Blurred by joyous tears, my eyes met his and I flung my arms to embrace him. As a parent-less child, I had found my superhero in my brother.