How to become powerful? – Game of Thrones Riddle

“The journey to become powerful begins with knowing what power is about. ~ Manas Madrecha

No single man in his sanity would not want to become powerful in this world. Before we contemplate about pursuit of power and seek the approach to acquire it, we should first know what exactly is it that we are looking for. It’s simple to define POWER, but not to understand it. Likewise, it is simple to yearn for it, but not to learn about/from it. So, what is power? Google says, “it is the capacity or ability to direct or influence the behavior of others or the course of events.”

Bruce Lee quote Knowledge will give you power, but character respect.
Booker T. Washington remarked Character is power.
Do you see the contradiction?

The answer to the many of our questions can often be found in unexpected places. Coming across books that not only become the greatest works of humankind, but also personally influence you, is seldom. Yet, with such discovery ensues self-analysis process.

A Song of Ice and Fire is one great piece of literature, replete with politics, diplomacy, enigma, emotions and thrill. It is a series of novels, authored by George R. R. Martin and popularized by the TV serial named Game of Thrones.

(If you aren’t aware about it, you may first click on the following button to first get an idea about the characters and basic plot, so that you may understand the riddle in a better way).

Summarized plot to know, before you read the riddle:

In the 1st book (A Game of Thrones), King Robert Baratheon returns to the capital, after hunting, severely wounded by a wild boar due to his heavy-drinking. Since Robert has never loved queen Cersei, and trusts his friend and his Hand Eddard Stark more, he tells him on his deathbed to write his will, stating Eddard is to become the Regent.

Eddard knows that after Robert’s death, the Queen would claim the throne, and she has many men on her side. As a precaution, he asks Petyr to bribe the City Watch (police) to support him when the time comes. After Robert dies, Eddard goes to the royal court to disclose the will, but Cersei has already declared her son Joffrey as the King, herself as the Queen Regent, and her father Tywin as the Hand.

Eddard shows everyone Robert’s will, which Cersei bluntly tears away and demands him to swear fealty to Joffrey. But, Eddard knows Joffrey is not the true heir, as he is a son of Cersei and her brother Jamie, and thus doesn’t acknowledges Joffrey as the new king. Cersei orders her men to arrest Eddard on account of treason. Eddard orders the City Watch to capture Cersei. But, Eddard finds that Petyr has betrayed him and City Watch sides with Cersei. Thus, Eddard gets arrested.

Sansa, daughter of Eddard Stark, pleads with Cersei to grant her father pardon, for she’ll ask her father to accept Joffrey as the king and confess his treason. In return, the Royal Council and Cersei agrees to send Eddard far away and not kill him. In prison, when Varys secretly tells Eddard about the offer, Eddard accepts it, after initial reluctance, fearing fate of his family without him.

Everyone, including Joffrey, Cersei, Sansa, Varys, the soldiers, and the common folk gathers at the city’s Sept to witness Eddard’s confession of treason. When he confesses, the High Septon (Sept’s priest) says treason is punishable offense, but sometimes one must be merciful. So, as per the deal, Cersei should now pardon him. But, all the common folk demand the traitor’s head. Surprisingly, to everyone’s horror, Joffrey disobeys his mother Cersei and the Council and orders Ser Ilyne Payne (headsman) to execute Eddard, who swiftly beheads him.

“A Clash of Kings” – 2nd book of the series A Song of Ice and Fire, succeed the 1st book with numerous twists and turns. Tyrion Lannister has come to the capital as Hand, on behalf of his father Tywin. Current scene: In Tyrion’s absence, Varys is talking to Tyrion’s whore at an inn. Tyrion arrives, astonished at Varys’ alleged omniscience of knowing everyone’s whereabouts. After a short talk, following takes place:

The eunuch (Varys) rubbed his powdered hands together. “May I leave you with a bit of a riddle, Lord Tyrion?” He did not wait for an answer.

“In a room sit three great men, a king, a priest, and a rich man with his gold. Between them stands a sellsword, a little man of common birth and no great mind. Each of the great ones bids him slay the other two.

Bowing deeply, the eunuch hurried from the common room on soft slippered feet.

During the course of the book, through further developments, gradually Tyrion and Varys begin to know each other. Current scene: As Tyrion’s behest, Varys has replaced City Watch commander. After a short talk, following takes place:

Tyrion did not trust Varys, though there was no denying his value. He knew things, beyond a doubt. “Why are you so helpful, my lord Varys?” he asked, studying the manâ€™s soft hands, the bald powdered face, the slimy little smile.

“You are the Hand. I serve the realm, the king, and you.”

“As you served Jon Arryn (previous Hand) and Eddard Stark?”

“I served Lord Arryn and Lord Stark as best I could. I was saddened and horrified by their most untimely deaths.”

“Oh, I think not,” Varys said, swirling the wine in his cup. “Power is a curious thing, my lord. Perchance you have considered the riddle I posed you that day in the inn?”

“It has crossed my mind a time or two,” Tyrion admitted. “The king, the priest, the rich man – who lives and who dies? Who will the swordsman obey? It’s a riddle without an answer, or rather, too many answers. All depends on the man with the sword.”

“And yet he is no one,” Varys said. “He has neither crown nor gold nor favor of the gods, only a piece of pointed steel.”

“That piece of steel is the power of life and death.”

“Just so… yet if it is the swordsmen who rule us in truth, why do we pretend our kings hold the power? Why should a strong man with a sword ever obey a child king like Joffrey, or a wine-sodden oaf like his father?”

“Because these child kings and drunken oafs can call other strong men, with other swords.”

“Then these other swordsmen have the true power. Or do they? Whence came their swords? Why do they obey?” Varys smiled. “Some say knowledge is power. Some tell us that all power comes from the gods. Others say it derives from law. Yet that day on the steps of Baelor’s Sept, our godly High Septon and the lawful Queen Regent and your ever-so-knowledgeable servant (Varys himself) were as powerless as any cobbler or cooper in the crowd. Who truly killed Eddard Stark do you think? Joffrey, who gave the command? Ser Ilyn Payne (headsman), who swung the sword? Or… another?”

Tyrion cocked his head sideways. “Did you mean to answer your damned riddle, or only to make my head ache worse?”

Varys smiled. “Here, then. Power resides where men believe it resides. No more and no less.”

“So power is a mummer’s trick?”

“A shadow on the wall,” Varys murmured, “yet shadows can kill. And ofttimes a very small man can cast a very large shadow.”

Tyrion smiled. “Lord Varys, I am growing strangely fond of you. I may kill you yet, but I think I’d feel sad about it.”

“I will take that as high praise.”

So, next time, you find someone to be powerful, remember that the person is powerful only because you look at him in that way. Because, power resides where men believe it resides. Thus, a very important factor for a person to be powerful isn’t limited to only him being knowledgeable or virtuous or strong or wealthy, but the belief that people have towards him, as adjured by his aura.

~ © Manas Madrecha
With excerpts from A Song of Ice and Fire, authored by George R R Martin. 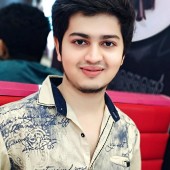 Yoga versus Religion: Is yoga against any religion?

You are beautiful! – Get Inspired