Recently, Justice Kennedy of USA Supreme Court passed a legendary decision favoring LGBT and their rights, upon which their entire community became gay (cheerful) over it. Millions and millions, across the globe came out in the support of the decision. So, even Facebook thought, “Why should we stay behind? Let’s ‘Celebrate Pride’!” 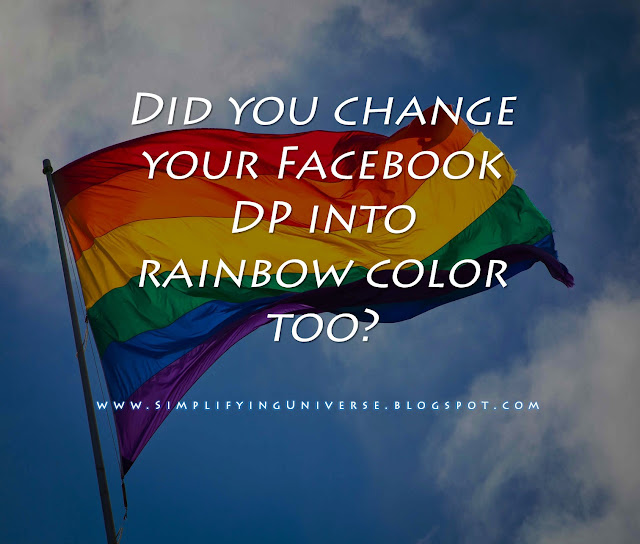 But what can an intangible website offer its people to help them to show their support more explicitly? Let’s launch a feature of applying their vibrant flag of rainbow onto your Display Picture. And this feature received such an overwhelming response that the cause of LGBT was put aside in the murky corners of harsh reality and yet again, the prime cause became how much COOL my DP is and how many likes can it garner!

Here is an anecdote, conveying the ironical reality behind some people’s intentions in changing their Facebook photos and their factual knowledge:

“Hey, your DP! It’s something out of the box,” she complimented.

“Yeah! Did you change your Facebook DP into rainbow color too?” he replied, while he continued to tap on the phone screen.

“Well, not actually. But, I have seen many others doing like this; it symbolizes something?” she asked curiously.

“It’s the new COOL! Everyone is doing this, so I do!” he replied, still lost in the phone.

She took out her phone and Googled it out. She initially laughed and then continued her grin.

“Nothing, just getting updates about LGBT!” she replied.

“LGBT? What does that even mean?” he replied.

She stood and left him with his phone and his virtual world of hypocrisy.

So, if you don’t support LGBT or don’t even know whom they are, then give yourself a break! First know! Then, act! Just don’t follow the bandwagon of rainbow-ing your profile picture, just because others have done it too! Pull down your funky DP, because if you don’t, then you are portraying that you concede to “unnatural” union.

And if you are an avid supporter of LGBT, my heartiest congratulations! If you haven’t yet changed your Facebook DP into the interesting rainbow, then do it now! Because, it’s really commendable and COOL: Both, your colorful DP as well as the recognition of the right of an human being to live his/her life based on individuality of choices!