They got off the car, all of them, brimming with excitement. Their friend was waiting, tickets in hand. They had planned this long ago, but schedules had clashed. Until this moment. They knew what was in store for them for the next ten minutes. As they walked towards the place, the words, Welcome to Scary Fort™ burning bright atop the building for all to see, they cracked jokes among themselves and clicked selfies. Yet, the moment the huge wooden doors closed, and a hand reached out from the curtains to beckon them forward, their screams echoed loud and clear from the narrow passage ahead. FEAR SELLS. 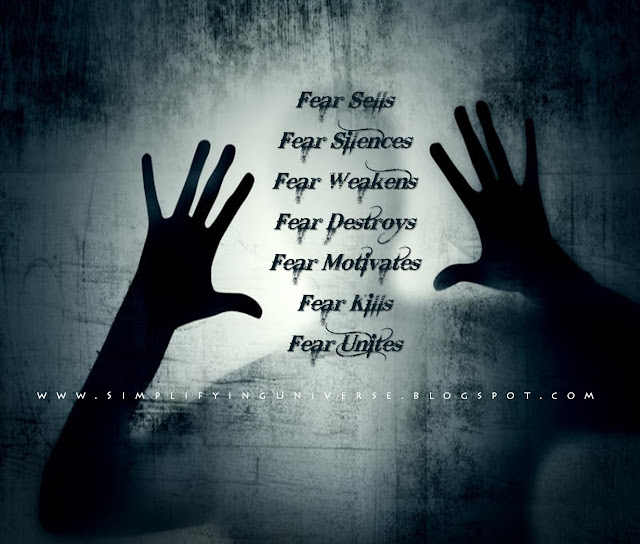 She looked at her watch for the fifth time in the last twenty minutes. He would be back any moment now. The thought made her shiver. She was still smarting from the bruises he had given her last night. She stroked her burnt hand and her cut lip. Yet, when her mother had called an hour ago, the words stuck in her throat. She had asked her again and again how she was. Maybe she could sense something was wrong. How badly she wanted to tell her mother everything. How badly she wanted to cry. But she heard herself replying in a practiced, alien voice, “I’m fine”. She looked at her watch again and closed her eyes. FEAR SILENCES.

He was the hottest guy of Spring Brook High. Captain of the basketball team, star forward in the soccer. The prom king. Every guy’s object of envy, every girl’s object of affection. As his black Jaguar rolled into the driveway, it was safe to assume there was no want of anything in life. Yet he wanted someone. He had written many letters, but hidden them away in his desk drawer. It was not just a crush, he knew. It had persisted for two years. There was no way he could confess his feelings. The risk was too much; he would lose all that he had. So, as Roger passed him in the hallway, all he could do was look at him longingly, his hidden letters coming alive in front of his eyes. FEAR WEAKENS.

They had been friends since the last twelve years. No secrets between them. No fights lasting longer than a day. All of it changed when he leaked the term papers. She knew of it, but wanted no part in it. He swore her to silence, but it was not enough to calm his nerves. He was scared she would tell on him. So he planned her downfall. Spread rumors one too many, maligning her character in the process. It was impossible for her to stay in town anymore. She cried all the time. When she called him at nights, he consoled her. His heart was heavy with guilt, but it was too late to confess now. This went on until her parents packed her off to a boarding school in a nearby city. He got what he wanted, but everyday seemed suffocating. FEAR DESTROYS.

The semester exams were just round the corner. His mother had called him downstairs for dinner, but he had brought his plate to his room. His desk was cluttered beyond imagination. Coffee cups to the right, and reference books to the left. There was not a moment to lose. He had always topped his class. He couldn’t digest the thought of losing that spot. What would the professors say? What would his parents say? And his classmates… wouldn’t they laugh? His eyes were burning, the strain was too much. But the fear kept him stuck to his books, stuck to his coffee. One month later, he was beaming as he saw his name right where he wanted, at the top of the list. FEAR MOTIVATES.

He could hear the sound of his feet as he dashed across the empty lamp-lit street. He gulped. He could hear the sound of their feet too. He tried to run faster, as fast as his legs allowed. They were only getting closer. He felt as if his lungs would burst any moment now, but he kept on running. He had only stolen a pair of shoes. Maybe they wouldn’t even hold him for a week. When they came after him though, his fear got the better of him and he ran, ignoring their angry shouts. His breathless sprint had landed him on the highway, when suddenly he realized the sound of their footsteps was fading away. He turned around and sighed in relief. At last he had lost them. When he turned back to face the blinding headlights of the truck, he knew he couldn’t run anymore. The truck sped on, his final scream drowned out by its growling engine. FEAR KILLS.

He pushed them. He shoved them. He pulled the girls’ hair and snatched the boys’ tiffin. He made fun of everything. Someone’s clothes, someone’s hair, someone’s voice. His father was the mayor. He took pains to let everyone know this fact. The teachers always sided with him. They knew the consequences of doing otherwise all too well. And so it went on until one day, a little girl refused to part with her toy. That was when they all rose against him. That was when they realized he cried louder than any of them ever had. And then everything changed. FEAR UNITES.

© by Harshita Hiya, from popular Facebook page: The Anonymous Writer

6 replies on “The Rainbow of Fear – Short Story on Fear”

Having read this I thought it was very enlightening.
I appreciate you spending some time and energy to put this informative article
together. I once again find myself personally spending
way too much time both reading and commenting. But so what, it was still worthwhile!

Heya i am for the first time here. I came across this board and I find It really useful & it helped me out much.
I hope to give something back and help others like you helped me.